Jeff’s career in magic began at age twelve when he found a book on coin tricks at his grandparent’s house.  Today, Jeff regularly performs for appreciative audiences at company banquets, festivals, private parties, and other special events throughout the Pacific Northwest and virtually worldwide.

Creativity Counts
Jeff is known as an innovative performer in the world of magic and his original routines have been printed in magic magazines including Genii, The Linking Ring, and M.U.M.  What does this mean to you?  Jeff has the special ability to create new routines and presentations to fit a theme, involve a special guest, or highlight a product or service.

Jeff is an active member of the International Brotherhood of Magicians, Pacific Coast Association of Magicians, and the Tacoma Magic Club. He strives to make each performance magically fun and outrageously impossible for his audiences.

Best of the Best

Can you imagine hanging out in one building with several hundred tricksters, each trying to fool each other? That’s what magic conventions are all about, and they attract the region’s best professional entertainers.

Over the past dozen years, Jeff has earned no fewer than SIXTEEN first-place finishes at magic competitions ranging from Calgary to Palm Springs.  He has been named Stage Magic Champion at the Northwest Magic Jamboree three times.  And, The Olympian newspaper selected him for their Best of South Sound Awards, the only time a magician has received this distinction.


Companies who Appreciate Quality Entertainment
Many Fortune 500 companies call on Jeff to perform for their events.  Boeing, Microsoft, Pepsi Cola, and R. E. I. are just a few of his repeat clients.  Like you, they know that they can depend on Jeff for top-quality entertainment that makes people glad they came.

It’s not uncommon for people to comment later, “It was amazing seeing the entire audience so involved in a performance. You had their total attention.”  Jeff’s friendly and relaxed style wins audiences over and makes you look good.

Jeff is based in Olympia, Washington and performs primarily in the Portland-to-Seattle region. His show is airline-friendly and he can travel internationally. And, virtual performances from his “Zoom Room” mean that you and your guests can experience his magic worldwide.

Jeff’s magic is honed to perfection in front of thousands of people each week, in over 250 shows a year.  Availability is limited.  Don’t let everyone else have all of the fun; contact Jeff today to learn how he can help make your event fun and unforgettable. 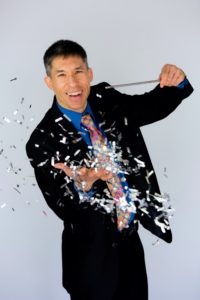 Jeff’s shows are backed by his Money-Back Satisfaction Guarantee